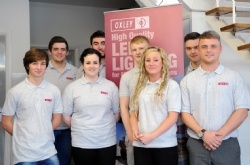 The Oxley Apprentice team taking part in the Brathay Apprentice Challenge has been selected as national finalists.

Now in its third year, the Brathay Apprentice Challenge is the search for the Apprentice team of the year and is supported by the National Apprenticeship Service. To win the challenge, teams of nine apprentices have to prove their team building, leadership, logistical and communications abilities. The teams compete in a series of work-related challenges to develop new skills, benefit their local communities as well as raise the profile of their employers and Apprenticeships.
The Oxley team competed in regional heats, visiting 10 local schools to present to pupils on the benefits of participating in an apprenticeship scheme and raising over £1000 and collecting food donations for the Barrow Foodbank.
The finalist announcement was made by Deputy Prime Minister Nick Clegg at a House of Commons event attended by apprentices Jeff Hayward and Joanna Harvey and Oxley Chairman Peter Bedwin MBE. Reaching the national finals is a considerable achievement for the Oxley team as they faced competition from over 100 teams. The Oxley apprentices represent the only SME to be declared a finalist and they are amongst such company as British Airways, Virgin Media, PepsiCo and QinetiQ.

The team now faces the final stage of the competition, which includes a community fundraising project and an awareness building campaign and finally culminates in a three day team building event at Brathay in Ambleside in June.