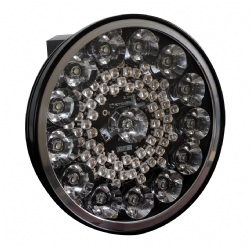 A new ground breaking dual-mode landing light has been designed by Oxley for the US Air Force and is being fitted to the legendary A10 Thunderbolt II close support ground attack aircraft after ‘phenomenal' success in the most rigorous testing.

The new landing light is the first to offer cockpit control to switch from visible to IR (for covert operations), a development which has been made possible only through the use of advanced LED technology pioneered by Oxley. The development process through design, prototyping, testing and manufacture was completed in-house at the Oxley Priory Park site in Cumbria over a period of 10 months. A dedicated project team of mechanical, optical and electronics engineers were tasked with the design and development of a custom-built solution, with significant investment in specialist tooling required.

The A10 Thunderbolt was destined to be phased out but has found a new lease of life due to recent US Air Force operational requirements, and will be retrofitted with the new light.

The high intensity light delivers 200,000 candelas (candle power) and was developed jointly by Oxley in Ulverston and Oxley Inc. in Connecticut. It has completed qualification testing and final flight tests by the US Air Force in the Arizona desert, and the results demonstrated that the new light outperformed existing units in every respect.

Feedback from US Air Force pilots and ground crew was universally positive with one test pilot commenting, ‘The leap in technology that the Warthog gains by upgrading to this light is like trading in a musket rifle for a laser guided rocket'. LtCol Alan McCracken went on to say, ‘The clean light that this product is able to generate far exceeds what we've had to put up with for decades. I can't believe we didn't switch to these taxi and landing lights years ago. These lights make my job, in the terminal phase of landing, easier, better and therefore safer.'

LtCol Alan McCracken also complimented the Oxley team on the project delivery, ‘Oxley has been the most professional vender with which I've ever worked. They've met or exceeded every timeline that they were given, the men and women are knowledgeable, friendly and willing to work to find solutions'.

A total of 314 lights will be required and manufacturing for delivery is already under way.

LED landing lights deliver dramatically reduced power consumption and infinitely longer service life with proven shock and vibration performance. Halogen units are inherently unreliable and ill-suited to withstand the vibration, shock impacts and extreme temperature fluctuations which are part of the natural life-cycle of a combat aircraft. Normal operational combat flying results in a typical halogen technology failure rate of just 25 hours, whereas and LED light offers a Mean Time Between Failure (MTBF) of more than 10,000 hours, which means a frequent failure point is removed to dramatically increase the operational availability of the aircraft. Total power consumption is around 145W compared to the halogen technology power consumption of 400W to 600W – representing a reduction of more than 60%, and the new unit represents a high through-life-cost saving compared to existing technology. The US Air Force will use this unit as both a landing light and a taxi light, which increases the A10's capability even further.

The A10 dual-mode landing light meets the stringent Aerospace Environmental and EMC requirements and is qualified IAW MIL-STD-810G and EMC to MIL-STD-461F. The robust construction has an aluminium housing with matt black hard anodised finish to MIL-A-8625 and a PMMA lens.